Have you ever written a story, or an essay, or the first draft of a novel, and then let it sit in a drawer for years on end?

Have you had those writing days when you’ve thought, Surely, all that effort was a waste of time?

I have, on both counts, and I dread hearing the committee in my head that confirms any failed project is a waste. Recently, though, when I overhead an instructor at a university talking with her dance students, I was reminded that nothing creative is ever done in vain.

This instructor described what she called “issue pieces.” For the artist, they are the early charcoal drawings or watercolors that symbolize a first heartbreak or a dark period. For the dancer, they are improv dances that interpret the loss of a friend or an event even more scarring.

These pieces are more emotional than they are artistic; they are often a sign of a beginner, and they are always a necessary step along the journey.

I understood exactly what this instructor meant. During my first few years of writing (serious writing), several of my short essays and stories retold or hinted at some disappointment or resentment or the realization that my parents and I were not that different — we were human, after all.

I even carried that angst into my first NaNoWriMo experience and wrote a 50,000 word issue piece. Much of the story was fiction, yet plenty of my real self showed up in that first draft. My novel told the story of a young woman during the year following her mother’s death, and, while my mother’s death was several years past, it still weighed heavily on my mind.

I poured my own grief onto those pages, let my emotions run raw in black and white. I’ve attempted a few rewrites of that novel, but today it sits quietly in a drawer.

It would be easy to view such pieces of writing (and a whole month’s worth of intensive noveling!) as a waste of time and energy. But as the instructor explained the importance of issue pieces for art students, I understood better how these pieces, and any kind of writing, work for the writer as well.

Nothing in Writing is Wasted

For a writer, every word we put down on paper (or onto a screen) is a lesson in technique. As K.M. Weiland said on Twitter once, “#YouKnowYouAreAWriterWhen you proofread and edit every text you send – and every one you receive.”

We constantly arrange and re-arrange words, whether we are scratching out a to-do list or crafting a masterful email to a potential client. We never think twice about those kinds of writing, so we need not criticize the work we put into those stories that rarely leave our desk or our hard drive.

Even something as simple as journaling can move a writer forward. For me, many of my personal essays begin their life in my journal and read way too personal to share with anyone else. Still, they serve an important purpose: to clear my mind’s palette.

In the early days, I couldn’t write anything until I expanded a series of journal entries into a 1000 word essay about my first real heart throb who bailed on me faster than I could squeak out three fatal words. That was/is a terrible essay, and I apologize to the other writers in my critique group who had to read it. However, that was a story I’d had to rid myself of or nothing more could come from my writer self.

T. F. Joyce speaks of the power of journaling in an article entitled, “Your Journal, Your Self,” in this month’s The Writer magazine (January 2013):

[L]ast year when I was struggling with relationships, work and family, a voice in my head would not stop nudging. It did not want a blog or a Facebook page. It wanted pen and paper and a door to discovery.

As Joyce goes on to explain in the article, “[the journaling experience] allowed me to get at truths.” Isn’t that one reason we write, to uncover and discover simple or complex truths in life?

And, as another author, Melissa Donovan, says in her book 101 Creative Writing Exercises, “Journaling…promotes observation, self-awareness, and reflection, all skills that great writers must possess.”

I’ve learned, as I’ve grown in the craft, that these kinds of essays and failed writings still surface, and I give them their time. I don’t ignore them but move through them, because, occasionally, bits and pieces of those works merge into other essays, stronger essays, and get sent out into the world of submissions.

And, if they don’t, they still have meaning to me as a writer: if I’d never been brave enough to get them onto the page, any page, in the first place, I’d never get past them and on to more – and better – stories.

Have you written an issue piece or an essay better left in a drawer? Can you see how it serves you as a writer? 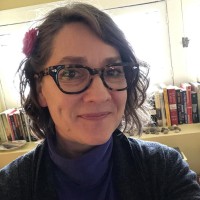 Christi Craig lives and writes in Wisconsin. Her stories and essays have appeared online and in print, and she was a finalist in Glimmer Train's Family Matters Contest. Visit her website at christicraig.com, follow her on Twitter, or subscribe to her page on Facebook.
« 5 Ways Writers Can Cure Where-do-I-begin-itis
Why Your Story Shouldn’t Be Too Tidy »